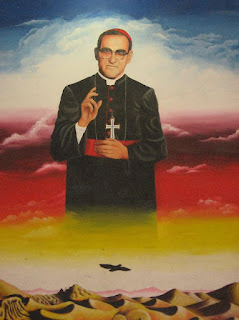 Español | italiano
The Salvadoran Church reports that three cases of miracles granted through the intercession of Blessed Archbishop Oscar A. Romero, assassinated in 1980 and beatified in San Salvador this past May 23rd, have been documented and the proofs sent to the Vatican. The information was disclosed by the current Archbishop of San Salvador, Mgr. José Luis Escobar Alas, at a press conference after Sunday Mass, in which he said he would ask Pope Francis to expedite Romero’s canonization during an encounter later this month. “We will ask the Pope for the prompt canonization of Archbishop Romero,” Msgr. Escobar said.
The Salvadoran Church had earlier announced that the Pope will receive a Salvadoran delegation at the Vatican on October 30. In total, the group constituted by all the bishops, various priests and lay public officials consists of some 500 people, including the Foreign Minister, Hugo Martinez, and the Minister of Governance and Communications Hato Hasbún.
Escobar said that “what we need to canonize” Archbishop Romero “is to demonstrate a miracle by him,” and in this regard he explained that documentation of three cases of “miracles” granted by the Blessed were recently sent for study in the Vatican. “There have been three miracles recently, these have already been sent to the Vatican, we expect the technical response, which the final decision will turn on,” explained the Catholic Church hierarch.  The archbishop said that there are three healings, which the Salvadoran Church considers to be miracles, however, the Vatican must undertake studies and assign experts to determine the facts. “When a person is canonized, a miracle must be proven and it is a great miracle, not just a small grace but a very significant and obvious one,” he said.
Escobar said that he does not have any response from the Vatican on the canonization of Romero, but he said that the process is completed and what remains pending is for the Congregation of Saints to certify a miracle. “We know nothing, but we will ask” for the early canonization of Romero and also the prompt beatification of Father Rutilio Grande, a friend of Romero assassinated in 1977, admired by Romero and Pope Francis, said the archbishop.  The archbishop confirmed that the Salvadoran bishops will ask the Pope to visit El Salvador to beatify Grande and canonize Romero when he visits Mexico next year.  [See also: the difficulties in planning such a trip.]

Meanwhile, authorities in San Miguel, the land of Romero, announced that the famous carnival celebrated annually in that city, will be in honor of the Blessed Romero and Our Lady of Peace, patron saint of San Miguel and co-patroness of El Salvador this year. “After the recent beatification of the most international San Miguel native, Archbishop Romero, it will also be a tribute to Archbishop Romero and of course all activities will aim to honor both Our Lady of Peace as well as Archbishop Romero,” said the mayor.
If the miracles attributed to the Salvadoran bishop martyr are approved, it would be a manifestation of divine approbation given in record speed, because not even six months have transpired since Romero's beatification.


[Partial index of the blog]
Posted by Carlos X.