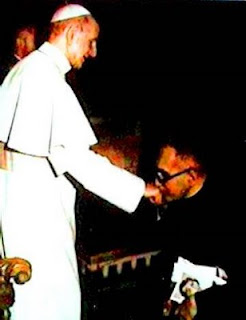 THE BROTHERHOOD OF PAUL VI

In his new, social encyclical, CARITAS IN VERITATE, Pope Benedict pays effusive tribute to his predecessor, Pope Paul VI, the pope who is seen as especially supportive of Archbishop Romero and his ministry in San Salvador. Romero himself said that Paul VI "confirmed me in the faith, in my service, in my joy to work and suffer with Christ, for the Church and for" the Salvadoran people. Romero cited Paul's own social encyclical, POPULORUM PROGRESSIO in sixteen different sermons over the three short years he was archbishop; and yesterday, Benedict called POPULORUM PROGRESSIO the most important papal statement on the Church's social doctrine of the 20th Century (Benedict called it "the RERUM NOVARUM" of our age, alluding to the first and most influential such document, by Leo XIII in the 19th Century).

In some respects, Benedict's high praise of Pope Montini was unexpected. Not because it did not demote political activism below charity as some observers have noted (though they are right that it reiterated the importance of the Church's prophetic role in public life), but because it seems to resurrect a papacy few would get excited about. The rap on Paul VI, fairly or unfairly, is that he was a Hamlet pope, lurching from progressive to conservative stances, without much keel, never pleasing either camp. Benedict's reverent fidelity to Pope Paul is reminiscent of Archbishop Romero's devotion to Pope Paul, who in his last pastoral letter recalled his visit to the new tomb of Paul VI and admired its simplicity. ("How I recalled by his tomb the warmth of his both hands grasping mine, little more than one year ago, to tell me of his concern and his love for our country, and to encourage me to accompany my people in their just grievances, so they would not stray to the paths of violance and hate").

In the very next paragraph, Romero praises the then-new pope, John Paul II, and one must only recall John Paul kneeling at Romero's grave, and Benedict saying he had "no doubt" that Romero deserved to be a saint to recognize a mutual loyalty among these men. In CARITAS IN VERITATE, Benedict also highlights John Paul's fidelity to Paul VI and to his encyclical, and part of this fidelity surely arises from the sincere dedication of these men to the Church. After all, we are talking about martyrs and popes! Another aspect to the mutual admiration surely is the generational affinity between Romero, Ratzinger and Wojtyla. Archbishop Romero was born in 1917, Karol Wojtyla was born in 1920, and Joseph Ratzinger was born in 1927. The three men grew up and worked as priests in the preConciliar period, and were called as bishops to implement the Second Vatican Council's reforms.

And there is one other shared characteristic. All three were, in some way, proteges of Pope Paul. Pope Paul VI created Wojtyla and Ratzingers as cardinals, and he appointed Romero Archbishop of San Salvador. Born in 1897, twenty years before the first of the three were born Pope Montini was a fatherly figure to all. This outstanding brotherhood will one day be seen as powerful confirmation of Pope Paul's prophetic wisdom in selecting apostles and evangelizers for the Church, and seems to confirm Pope Benedict's instinct that the world was topsy turvy, while Giovanni Battista Montini was standing perfectly upright.
Posted by Carlos X. No comments: 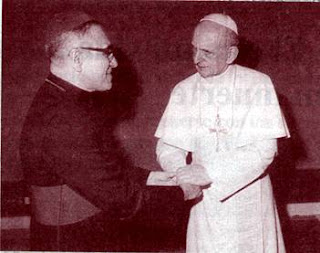