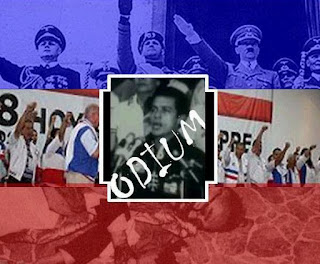 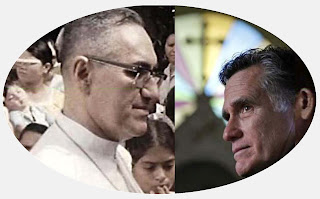 Reports of businessmen linked to Salvadoran death squads investing money in Bain Capital—the investment firm associated with U.S. Presidential Candidate Mitt Romney—raise important questions about whether the investors had any such links, and what Mr. Romney knew about them. An independent commentator recently concluded that, “The evidence” of linkage “is tenuous at best,” and that there is, “no evidence that Mitt Romney was ever aware,” of any linkage. Unfortunately, in the hyperbole of a campaign year, some of the reporting misleadingly implies that a definitive link between the investors and death squads has been established, and that Romney either knew, or turned a blind eye to it. The reporting also implies a connection with the assassination of Archbishop Romero. That insinuation, for one, is spurious.

An example of the sloppy coverage came in a recent interview of Ryan Grim, the author of a Huffington Post piece on the supposed link. Amy Goodman, host of the independently syndicated Democracy Now!, played a clip of Raul Julia as “Romero” and then asked Grim to “talk about how he died and the connection to your story.” Grim responded that we “know, conclusively, that [Romero’s] assassination was ordered by Roberto D’Aubuisson;” that D’Aubuisson started the rightwing ARENA Party, which was “quite simply, the political organization which was managing the death squads;” and therefore, “Mitt Romney, in this context, knew very well what was happening in El Salvador.” While the evidence consistently points to ARENA founder D’Aubuisson as the intellectual author of Archbishop Romero’s assassination, the characterization of ARENA as “the political organization which was managing the death squads” that killed Romero is problematic: Romero was killed on March 24, 1980, and ARENA was first registered as a political party in El Salvador on December 4, 1981.

Evaluating the byzantine relationships considered in the Huffington Post article and a similar article recently posted on Salon.com requires following a convoluted path, but none of the suggested connections used to cast suspicion on Romney and Bain establish a direct link between the investors and the death squads, and certainly not with the assassination of Archbishop Romero. A titillating prospect is put forth in the Salon piece, authored by Justin Elliot, who posits that the original Bain investors included four members of the de Sola family, and that a fifth member of that family is mentioned in a ledger seized from a D’Aubuisson aide which reflects purchases of weapons used in the Romero assassination. While that much is true—that the de Sola kinsman was named in the ledger—the man in question, Orlando de Sola, was not mentioned in the ledger in relation to the Romero assassination, but with respect to another matter (making contributions to the Nicaraguan contras, an armed group seeking to topple the neighboring Sandinista regime).

Similarly, the Huffington Post piece floats the possibility that certain named investors or their relatives could be linked to the death squads, but does not quite get us there. Some of the suspicions entertained and promoted are based on accusations against the investors’ relatives, as was true in the Salon piece just discussed. At other times, the suspicion is based solely on a connection to the ARENA Party. For example, the Huff piece notes that, “Ricardo Poma was the first investor Romney thanked when he traveled to Miami in 2007,” in a notorious speech in which Romney name-dropped some of the Salvadorans to flaunt his Hispanic bona fides. Ricardo Poma (the man Romney thanked), the article continues, “became one of the three members of the Bain Capital investment committee,” and it concludes with the ominous note that, “The Poma family were financiers of D’Aubuisson’s ARENA party.”

While factually true, the danger is that, by themselves, these facts about the de Solas and the Pomas, don’t establish complicity with the death squads. For one thing, wealthy Salvadoran families often were divided between members who were complicit with one band and those who sympathized with the other side. Miriam Estupinián was Archbishop Romero’s private secretary and devoted collaborator. She herself was from a wealthy family, from whom she hid her work with Romero. (In fact, even the D’Aubuisson family is thus split. Marisa D’Aubuisson, sister of the ARENA founder, is a fervent Romero devotee, who encouraged her brother to kneel in repentance at Romero’s grave.) In an interview, the archbishop’s secretary described how “progressive” members of these families worked on the same archdiocesan projects that she worked on for the benefit of the poor, and that among these progressive businessmen were, “Francisco de Sola, Ricardo Poma, Luis Poma,” and others—the same families (de Sola and Poma) and even the same individuals (Ricardo Poma) accused in the Salon and Huffington pieces.

Archbishop Romero himself appears to vouch for these families. In his pastoral journal, he recounts a meeting in August 1979, with “Messrs. Poma and de Sola.” He describes them as “Two leaders of private enterprise who are very concerned about the country’s situation, and they wanted to share with me their opinion on the matter since, they maintain, the Church is the only entity that has a moral voice that can guide the country.” Archbishop Romero recounted the Poma and de Sola meeting in his next Sunday sermon and he described them as “businessmen who maintain good labor relations with their workers, even beyond that which the law requires,” and called them “lights of hope.” Romero’s secretary recalls that the families were friendly towards the archbishop as well, and that he had to turn down their gifts. “The Pomas,” she recalled, “were going to give him a car, and he said no.”

Of course, it is still possible that some of the Bain investors had real connections to the death squads that have not been fully described or disclosed. But it is wrong to impute guilt by association or to bandy about Archbishop Romero’s good name just to score political points. That’s just the type of manipulation of his figure that has hurt his cause. Such manipulation was evident in a recent opinion piece that posited that, because Romney was in bed with death squads responsible for the death of Romero (an unproven contention, we know), Romney is not really “pro-life” (“They killed priests, nuns and Archbishop Oscar Romero. How pro-life is that?”).

While we should ask Mr. Romney’s campaign to provide more information about the Salvadoran investors (and, if necessary, ask Bain to divest itself of any “blood money”), let’s not rake Archbishop Romero through the mud. We would do well to model Romero, who did not shrink from denouncing atrocities, but he made sure that any accusation was first substantiated by his legal team. Perhaps tellingly, although Archbishop Romero repeated death squad accusations against D’Aubuisson, he did not make those accusations against the Bain investors.
Posted by Carlos X. No comments: 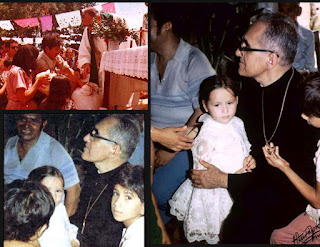 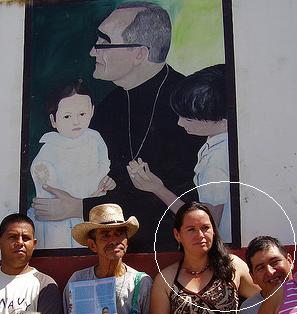 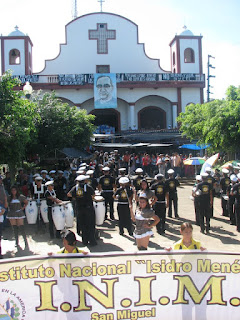 ROMERO and the DIVINE SAVIOR 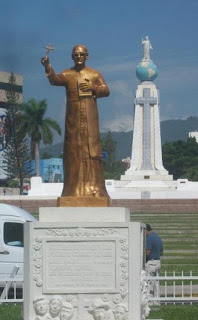 At Plaza de las Américas—the iconic front porch of glitzy West San Salvador, on the far end of Alameda Roosevelt, the outstretched ribbon that leads east from here to the gritty urban clutter of downtown San Salvador and the Metropolitan Cathedral—there are two monuments. One is the postcard attraction that literally defines El Salvador: an image of Christ, astride the terrestrial orb, atop an obelisk-like pedestal. “El Divino Salvador del Mundo”—the Divine Savior of the World, is the country’s patron, and His Feast Day, on the 6th of August, is the country’s own spiritual holiday. The Divine Savior inhabits a monumental roundabout on the Alameda and, in a landscaped traffic island about 350 feet in front of it, stands a human scale statue of Archbishop Oscar Romero. It is a providential placement.

Romero stands between Jesus and Greater San Salvador, as if he was an intermediary between the Savior and the saved. “When I as pastor speak to the People of God, I do not pretend to be a teacher for everyone in El Salvador,” Romero said in his famous last Sunday sermon. Instead, he said, he was, “the servant of that remnant that calls itself the Church, the Archdiocese.” For that reduced group of true believers, Romero insisted, he was “the teacher who speaks to them in Christ’s name.” Romero is also a mediator between Salvadorans and their Divine Savior because he made it a point to explain with greater clarity than any other preacher the meaning of their national feast. Beginning with an Aug. 6 sermon the year before he became archbishop, and with three of his four pastoral letters issued on the date of the national feast, Romero developed what he would call a “Transfiguration Theology.” The Salvadoran holiday celebrates the Feast of the Transfiguration—the Gospel account wherein Jesus is confirmed in his Messianic mission by God’s voice from on high, and His face shines like a brilliant sun. Jesus, Romero preached, is inviting Salvadorans to transfigure themselves so they can then reform their corrupt society. This was, Romero preached, the genuine path to true Liberation.

Over the years, Plaza de las Américas, or Divine Savior Square as locals call it, has become the rallying point for parades, carnivals, and protest marches of every stripe, which then proceed down Alameda Roosevelt to San Salvador’s main square, where the old National Palace and Metropolitan Cathedral are located. It is also the path of the candlelit processions that commemorate Romero’s murder, every year. Therefore, Romero, in statue form at the Divine Savior monument, and in his bodily remains at the Cathedral, continues to bear witness to the trials and celebrations of his nation. This year, Salvadorans were reminded of Romero’s perennial presence as a symbol and point of reference when, during nationwide protests spurred by the right in an institutional showdown between El Salvador’s still immature branches of government, protesters defaced Romero’s statue. The incident touched a raw nerve, unpacking quiet but deep indignation—not only at the damage to the monument, which was grave, but more at the inherent disrespect of the vandalism. The feeling was so widespread that the rightwing mayor of San Salvador—a presidential aspirant—appeared at the site of the monument and denounced what he called the “hatred” of the attack, called for respect for the figure of Romero, and promised that the city would help pay for the restoration.

In March 1980, Romero preached his last Transfiguration sermon. He sounded a hopeful note. “God’s plan is loving and powerful and capable of transfiguring all the miseries, injustices, and sins of the people of El Salvador”—he said—“transforming all these realities and all women and men into people in whom the beauty of Christ’s justice and holiness shines forth.” The monuments at Plaza de las Américas embody that hope.
Posted by Carlos X. No comments: