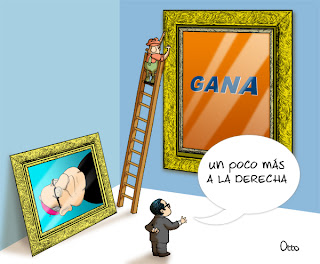 When Mauricio Funes Cartagena was elected President of El Salvador in 2009 promising to make Archbishop Romero his “spiritual reference point” for governing, many thought that his coming to power would mean, at long last, justice for the slain prelate, assassinated in March 1980, and overlooked by Salvadoran justice, which, bafflingly, has never brought charges. Such hopes were trimmed when Funes signaled, early on, that he would not seek to lift the protection of the blanket 1993 Amnesty Law, even though it has long been “seen by activists and United Nations experts as the biggest hurdle to achieving respect for human rights” (IPS report).


Image: Political cartoonist mocks President Funes’ well-touted admiration of Archbishop Romero, implying that Funes has traded his values for more pragmatic considerations, such as his closeness with the fledgling conservative GANA party. (Caption says, "A little more to the right.")

In fairness, the first leftist government to take office in the post-war period had a full plate of reforms and reparations to tackle, after 20 years of right wing rule in El Salvador, and many pressing current challenges to contend with. Additionally, the Romero legal case is just as thorny and complicated as its ecclesial counterpart (the cause for canonization). To bring a case, the government would have to conduct exhaustive investigations, which never have taken place in El Salvador. It would have to formulate a prosecution that skirts the aforementioned Amnesty Law, and is impermeable to challenges based on statutes of limitations (whereby the time to bring charges for particular violations may have expired), retroactivity (defendants cannot face liability under today’s laws for acts that may have predated their enactment), lost evidence (including witnesses who may have died or ‘disappeared,’ or may otherwise be unavailable or unwilling to testify) and other similar problems that can plague a delayed prosecution. Still, it is sobering to measure the Funes government’s handling of the Romero case against the actions of former governments, which were hopelessly conflicted and lacked credibility on the issue, as their party’s founder (Roberto D’Aubuisson) is the person widely believed to have ordered the assassination.

While the Funes government has made grand symbolic overtures, such as apologizing for the state’s involvement in the assassination, and promising to comply with orders stemming from OAS investigations, these measures are not a substantive departure from the policies of ARENA governments, which also attempted to use symbolic steps, such as petitioning the Vatican to transact Archbishop Romero’s canonization, while avoiding true reddress in the case. The shortcomings of the “change government”’s stances were recently laid bare by statements made by Attorney General Romeo Barahona when questioned regarding the likelihood that he would open an investigation now that a Salvadoran newspaper has published what it claims to be the identify of Romero’s killer, for the first time since the assassination. (Other reports have alleged the involvement of “grand capitalists who today live from their riches as though they did not have hands stained in blood” in ordering the assassination—LA TIMES 3/24/2010) Despite being handed what could be the most significant new evidence in the greatest break-through in the case, Barahona would only say that he “does not rule out” opening a new investigation, but that, “With the information on hand, we would have to analyze and see if it is possible to steer toward a new investigative hypothesis.” (CoLatino 9/28/2011.)

In the aftermath of the revelations about the identify of Romero’s killer, there were calls for the case to be reopened. Archbishop Romero’s brother stated what can only be characterized as a truism when he said in an interview that, “It is necessary, just, and legal for the Attorney General’s Office to investigate,” the shooter in the Romero assassination. (CoLatino 9/27/2011.) The Salvadoran Church has been analyzing whether it should formally ask for a new investigation to be opened. “The Catholic Church would like for the justice system [of El Salvador] to work as in other countries,” said the current Archbishop of San Salvador, Jose Luis Escobar Alas. “I make an appeal for there to be justice, that the responsible institutions operate fully and gain credibility,” he said. (CoLatino 9/26/2011.)

Despite such appeals—and Msgr. Escobar Alas’ words were not constrained to the Romero case alone, but to other crimes from the war period—Attorney General Barahona has made it clear that he takes a much narrower view. After the Constitutional Chamber of the Supreme Court recently ruled that the Attorney General had to answer a lawsuit for the non-investigation of a civilian massacre from 1981 (La Prensa Gráfica 10/21/2011), the Attorney General responded that he would remand the case to the old justice of the peace who had original jurisdiction over the case when it arose. Presumably, a justice of the peace also had jurisdiction over the Romero assassination and other war crimes. It is unclear whether the individual functionaries are still around or how well the Attorney General’s strategy would advance the cause of justice in these cases (the Judge originally assigned to the Romero case fled the country after receiving death threats). 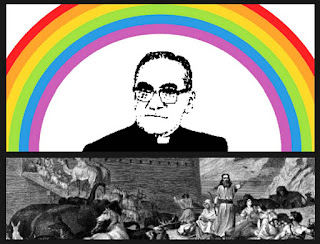 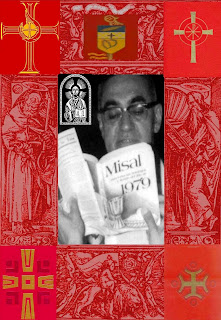