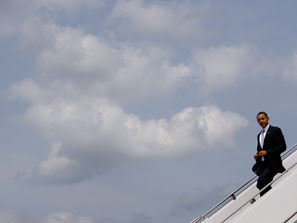 U.S. President Barack Obama announced in his State of the Union speech that he will go to Brazil, Chile and El Salvador in March. The Salvadoran press is reporting that Mr. Obama will wind up in the land of Archbishop Romero on March 23 -- on the eve of the anniversary of the Romero assassination, which, beginning last year, is celebrated as a near national holiday in El Salvador. Will Mr. Obama visit Archbishop Romero's grave?

Obama praised Archbishop Romero in his Oval Office remarks in welcoming Salvadoran ambassador Francisco Altschul in June 2010. There is presedent for visiting dignitaries to pay tribute to Archbishop Romero at his grave. Discounting the two visits by Pope John Paul II (in 1983 and 1996), the most recent prominent visitor was Brazil's own Luiz Inácio Lula da Silva, who visited in 2010. Left-leaning South American presidents Rafael Correa of Ecuador and Fernando Lugo of Paraguay have also come by.

On the other hand, Mr. Obama simply may not have time to fit in such a symbolic gesture into his busy schedule. President Bush visited El Salvador on March 24, 2002, the actual date of the Romero anniversary and did not acknowledge the date in his public activities. And Mr. Obama may wish to stay away for another reason -- he may not wish to reignite 2008 campaign charges that Mr. Obama adhered to some form of "Liberation Theology" espoused by his pastor, Rev. Jeremiah Wright. If he did visit Romero's grave, however, it would undoubtedly help to create unity in El Salvador and to add energy to Archbishop Romero's canonization cause.

Footnote: Salvadoran President Mauricio Funes has said he wants to talk to Mr. Obama about ways to work together to end poverty and social exclusion. The theme of the visit certainly would be apropos to commemmorate Romero, since Obama's praise for Romero in June was over his commitment to "social inclusion."
Posted by Carlos X. No comments: 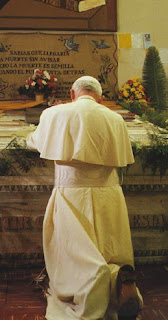 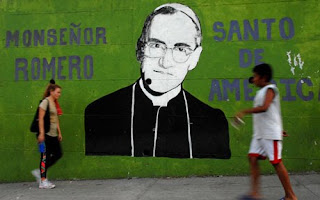 The prospects for Archbishop Romero’s beatification in 2011 look better than they have looked in a few years, but not quite as good as they looked in 2005, when some of us thought the approval of Romero’s beatification was imminent before the death of John Paul II. As we begin the year, we can say that Romero’s cause has fulfilled the substantive and procedural requirements, and that the prudential considerations which have for the past three or four years been identified as the main stumbling blocks, have also been overcome. Therefore, it appears as though the path is clear for the cause to proceed. However, there are no signals that would indicate an impending acceleration.

Let’s review the major premises of the foregoing statement. The substantive and procedural requirements are satisfied. Church authorities now have the results of multiple proceedings—by the U.N., the OAS, a U.S. federal court and now the official recognition by the Salvadoran government, as well as newly released admissions by participants—which establish that Romero’s killers killed Romero because they took exception, they “hated,” what he preached and practiced. Church authorities also have internal, Church-conducted studies that prove that what Romero preached and practiced was “the faith”—they have established his orthodoxy and his orthopraxy. Therefore, it is possible to prove that Romero was killed in odium fidei, in hatred of the faith. This takes care of the substantive requirements. The procedural requirements also are satisfied: the diocesan investigations were completed in San Salvador, and the Roman investigations have been handled in the Vatican, thus completing the corresponding requirements of process.

The prudential obstacles that previously existed largely have been removed. It used to be said that a Romero beatification would embarrass the Salvadoran government, because the Church would be forced to point a finger at state-affiliated persons in order to beatify Romero. As noted previously, the State itself has accepted these findings and even accepted responsibility for Romero’s murder, so that concern is gone. Officials previously had voiced concerns that Romero’s beatification would be taken hostage by political radicals who would celebrate the beatification in the streets while the reaction of officialdom would be muted in contrast, due to continuing division in official circles about whether Romero was a saint. Here, again, the cause for concern has collapsed. The last two Salvadoran presidents, including a right wing president, both have supported Romero’s sainthood and the current president has even raised the celebration to the status of a national cause. More importantly, all of the bishops of the Salvadoran Church have rallied behind Romero’s sainthood. Therefore, if there are street celebrations, they will be in harmony with, not in shrill dissonance with, the official reaction.

In fact, Romero’s beatification is likely to receive broad approval from many institutions around the world, thus lending credibility to the Church. In addition to the Salvadoran government plaudits, just this past year, Romero has been praised by the head of the OAS, by the Central American parliament, by a resolution of the UN, by President Barack Obama, and by leaders of the Church of England, where Romero’s figure has grown in popularity in recent years. Accordingly, one could argue that the prudential considerations, if anything, actually have inverted, where now it is unwise not to beatify Romero sooner rather than later. Let us hope that the prevailing winds are sustained. 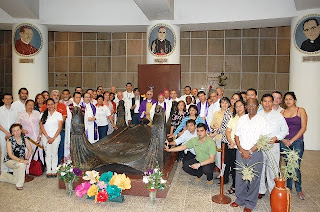 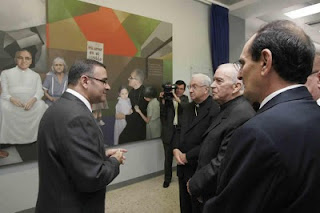 Let us remember the year that was for Archbishop Romero.

2. The Salvadoran State honors Archbishop Romero. In El Salvador, the first elected leftist government in modern history took part in the official conmemorations for the first time, ever. In the most striking gesture, President Mauricio Funes (pictured) asked forgiveness for the state role in the assassination, dramatically apologizing to Archbishop Romero’s family and to the Church. Bishop Gregorio Rosa Chávez was reported to remark, "This marks a before and after in the history of El Salvador." In the Salvadoran assembly, political groups on the left and the right joined to declare March 24 Óscar Romero day. Only the imploding ARENA party founded by Maj. Roberto D’Aubuisson abstained (D’Aubuisson is widely believed to have ordered the assassination).

3. The Salvadoran bishops unite behind appeal to Rome urging Romero’s sainthood. In stark contrast to the divisions that plagued the Salvadoran bishops during Romero’s time, the current bishops announced that they would send a letter to the Vatican endorsing the speedy canonization of their martyred brother. The move, together with the official embrace of Romero, seemed to leave no oxygen for Romero bashing in any major part of Salvadoran society, for the first time since the end of the war.

4. Alvaro Saravia tells all. Major revelations about the Romero assassination were disclosed this year in a very unexpected place – in the Salvadoran press. The web site of the weekly El Faro crashed for several days due to online traffic after it published an extensive, exclusive interview with the D’Aubuisson aide accused of having executed the assassination plan. Saravia tells a harrowing tale, implicating D’Aubuisson and others. Yet the greatest drama results from Saravia’s own lot, reduced to a pauper living in the margins, and admitting to feeling a sense of identity with the voiceless whom Romero defended.

5. U.N. declares March 24th conmemoration. The United Nations General Assembly passed a resolution declaring March 24 as International Day of the Right to Truth, in relation to serious violations of Human Rights and Dignity of Victims, in honor of Archbishop Romero. The U.N. resolution is the latest of various conmemorations of the March 24 date, including the Roman Catholic Church's conmemoration of Missionary Martyrs' Day, the Church of England recognition of the Feast of Óscar Romero and the Martyrs of El Salvador, and the declaration of Romero Day by cities around the world, including L.A.

6. Pope Benedict encounters Romero in London. When Benedict XVI visited Westminster Abbey in London on September 17, 2010, he passed under the prominent statue of Óscar Romero. The Dean of the Abbey told the Pope, "Here we have the statues of the martyrs of the twentieth century, and this is Óscar Romero." The Pope gazed at the white statue in the middle of the array and he said, "Ah, yes. And when was it installed?" The Dean told him that the statue had been there since 1996, highlighting the lag between Anglican and Catholic recognition of Archbishop Romero’s sainthood.

7. Central American Parliament posthumously bestows its Grand Cross. The Central American Parliament, composed of El Salvador, Guatemala, Honduras, Nicaragua, Panama, and the Dominican Republic, posthumously awarded Archbishop Romero the Order of Francisco Morazán in the grade of Grand Cross, the highest decoration that the organization bestows. The award was accepted by the late Archbishop’s brother, Gaspar Romero, who admitted, "Archbishop Romero would have been wary of accepting an award such as this one, because he was very humble."

8. Texas school board’s questioning of Romero’s relevance causes outcry. When the Texas Board of Education voted not to approve including Archbishop Romero in its history books because he was not sufficiently notable, they were lampooned by TV host Jon Stewart for their circular, self-fulfilling reasoning. The debate was picked up by national commentators and the incident became a flashpoint in charges that the board was pushing an ideological agenda in disregard of sound academic practices/good history.

9. Pope infuses new blood into Congregation for the Causes of Saints. At the end of the year, Pope Benedict made important new appointments in the Vatican agency charged with approving saints. The Pope named Msgr. Marcello Bartolucci as the new secretary of the CCS, Fr. Boguslaw Turek as the undersecretary, and the Holy Father named three cardinals as members of the Congregation: Cardinal Francesco Monterisi, Cardinal Fortunato Baldelli, and Cardinal Paolo Sardi, all new cardinals created in the recent October 2010 consistory.

10. Barack Obama praises Óscar Romero. Finally, the most powerful man on earth weighed in on Archbishop Romero’s merits. Welcoming new Salvadoran Ambassador Francisco Altschul on June 29, 2010, Obama praised the values of the Salvadoran people, and he singled out Archbishop Romero, whom Obama said was someone who "spoke in the name of justice and social inclusion." Obama said Romero had been committed to democracy and freedom. And so, Romero this year was on the lips of presidents and popes, with praise coming from PARLACEN, the OAS, and the U.N. as well as peasants and commoners.