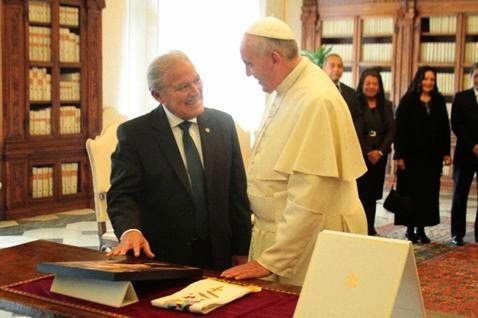 Pope Francis met on Friday April 26 with Salvador Sánchez Cerén, the Vice President of El Salvador, who is also his country’s President-Elect (he takes over on June 1st) and the two discussed the canonization cause of the assassinated Salvadoran archbishop, Óscar A. Romero.


During their encounter, the President-Elect presented the Pope with a facsimile of a painting of Archbishop Romero created by the Salvadoran artist Josué Villalta and displayed at a World Youth Day rally the Pope held in Rio de Janeiro last year.  The Pope met in private with the Vice President for 26 minutes.  Prior to meeting with the Pontiff, Mr. Sánchez Cerén met with the Vatican’s Secretary of State, Cardinal Pietro Parolin.

The meeting came about on the same week that a year before, Pope Francis had told the postulator of Romero’s cause that the cause was unblocked, after a couple of years of stagnation under Vatican study. The Vice President met with the postulator of Romero’s cause on Thursday April 25, and thanked him for all his efforts. He also reportedly told him that the Salvadoran government respects the Church’s time tables for Romero’s beatification.

The Pope’s meeting with Mr. Sánchez Cerén also comes less than one year after Pope Francis met with El Salvador’s President, Mauricio Funes, who is still in office, also to push for Romero’s beatification. Mr. Funes became the first politician from the Left to be elected in El Salvador after the Civil War that raged in that country during the 80s. And Mr. Sánchez Cerén will be the first president to come from the guerrillas.

Friday’s meeting takes place in a flurry of activity by political and religious Salvadoran officials pushing for their slain shepherd’s beatification. A contingent of four Salvadoran bishops, including the current Archbishop of San Salvador, are also in Rome these days. Like the Vice President, they will be attending the double canonizations on Sunday, April 27, of Popes John XXIII and John Paul II. But they will also meet with the Pope and hand over a letter inviting the Pope to El Salvador in connection with the hoped-for canonization.

There is some speculation that the Salvadorans are lobbying for Archbishop Romero to be beatified as early as March of next year, when it will be 35 years since his assassination, and to be canonized before 2017, the year that marks the centennial since his birth in 1917.
﻿

﻿
Posted by Carlos X. No comments:


Posted by Carlos X. No comments: 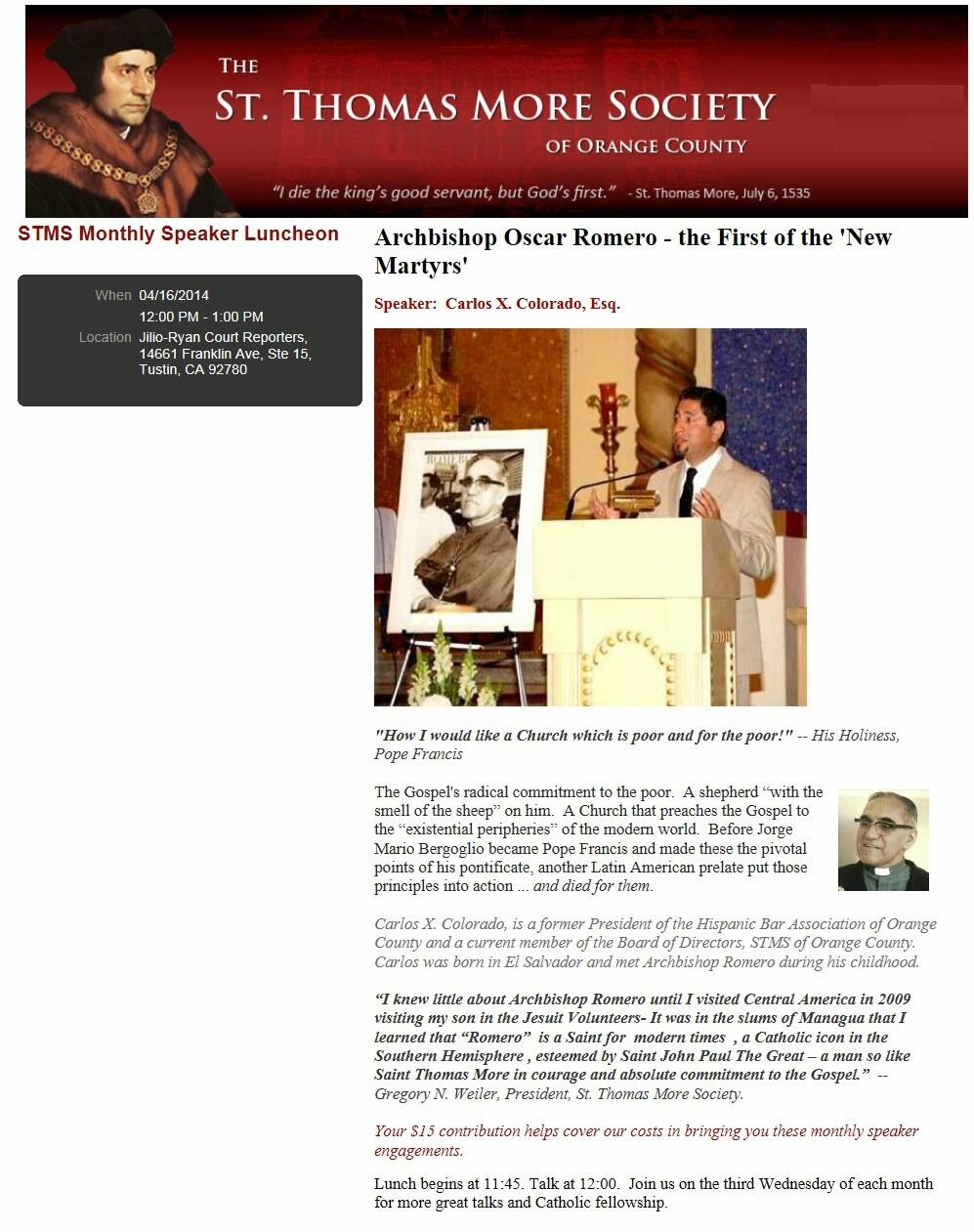 «Thanks to God, we are not only aware of the stories of the martyrs of past ages but we are also conscious of the martyrs of our own time. Priests, religious, catechists, and humble people from the rural area have been assassinated, beaten, crushed and persecuted because they remained faithful to the one God and Lord, Jesus Christ.»


Rorate Cæli reports that “for the first time in decades, a bishop of the Diocese of Rome [has] celebrated a Pontifical Mass [recently] in the Parish Church assisted by the Fraternity of Saint Peter.” The news has caused some jubilation among admirers of the «Mass of the Ages» (the Extraordinary Form of the Catholic Mass, in Latin, according to the pre-Conciliar Rite) because the celebrant is not from the traditionalist camp.  “The man is no traddie,” acknowledged Fr. John Zuhlsdorf in his blog.  “A bishop from the clergy of the Sant’Egidio community is not someone you expect to want to be with us. And yet he asked to come and celebrate Mass” (emphasis in original).


The bishop in question should ring a bell to readers of this Blog.  It is Auxiliary Bishop Matteo Maria Zuppi, whom we have seen before.  In late 2012, his inaugural discourse for the «Year of Faith» focused on Archbishop Romero.  “To look at a martyr,” Bishop Zuppi explained, “is even more helpful than studying the Catechism.”  This is not to say that martyrs are “a superior class of Christians,” he said.  But, rather, martyrs are ordinary people who have simply “loved more than others.”  Then last year, for Archbishop Romero’s 33rd anniversary, Bishop Zuppi spoke to Vatican Radio about the importance of Romero’s legacy.  He said that Romero’s death helps us remember all the other martyrs, is important for the Year of Faith because Romero’s passion for the poor stemmed from his faith, and highlights the Church in Latin America at a time of a when the Church has its first Latin American pope.


Bishop Zuppi’s participation in a traditional liturgy, and his outreach to admirers of the pre-Conciliar rite are true to the spirit of Archbishop Romero.  First, as recently noted here, Archbishop Romero had great reverence for the liturgy.  More importantly, Romero was a man of the Church who extended bridges to various movements and communities in his archdiocese, including Opus Dei and the Neocatechumenal Way.  Archbishop Romero spoke fervently about the universality of the Church, saying “I have often imagined the Church as a large tree with one branch at one extreme and another branch at the other extreme. The branches do not know one another but are receiving sap from the same trunk and they share the same life.”  Finally, Archbishop Romero always coupled social action with deep devotional practices.


For all of these reasons, Bishop Zuppi’s action appears to channel Archbishop Romero.