ROMERO ON THE 33rd ANNIV. OF HIS DEATH 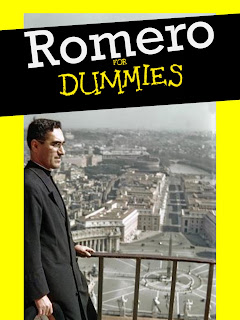 
«ROMERO FOR THE YEAR OF FAITH»


Sunday, March 24, 2013 marks the 33rd anniversary of the assassination of Archbishop Óscar A. Romero of El Salvador (pictured, as a young priest at St. Peter’s in the 1950s).  To some, he is a saint.  To others ... he is a name they may have heard thrown around, but do not know much about.  If that describes you—don’t despair.  Here is a Romero primer.
The Basics


Msgr. Óscar A. Romero (b. Aug. 15, 1917) was Archbishop of San Salvador (the capital of El Salvador, in Central America, between Mexico and Panama) from 1977 to 1980.  He was assassinated by rightwing mercenaries on March 24, 1980 after being accused of supporting Marxist rebels by his preaching in defense of the poor.  His assassination unleashed a 12-year civil war.  Bd. Pope John Paul II prayed at his tomb during visits to El Salvador in 1983 and 1996, and approved the opening of Romero’s canonization cause in 1994.  The process has been pending in the Vatican since 1998.
Martyrdom


The thesis for Romero’s canonization is that he was killed a martyr and that his assassination was an act of hatred against the Christian faith, insofar as its precepts of justice and charity are enshrined in the social doctrine of the Church.  Detractors argue that the motive for Romero’s killing was not hatred of the faith, but simply a violent reaction based on politics.  The two are not mutually exclusive, as many modern martyrs, including the victims of the Mexican Cristero wars, the martyrs of the Spanish Civil War, and the victims of Nazism/Fascism and Communism, attracted persecution that involved politics but also implicated the faith.  The Church uses experts and scholars to sift through the evidence and establish «odium fidei» (hatred of the faith), which is why these processes take so long.
Political Manipulation


Pope Benedict has said that, “the problem” in Archbishop Romero’s canonization process has been that the Left has “wrongly wished to use him as their badge, as an emblematic figure.”  This attempt to appropriate Romero complicates the Church’s attempts to canonize him.  First, the more Romero is seen as a symbol of the Left, the harder it is to say he was killed because he preached Christian justice (hatred of the faith)—and the easier it is to say he was killed because he was ‘of the Left’ (political reasons; see Martyrdom point).  Second, there is concern that if Romero was canonized in an overly politicized environment, his sainthood would not be properly understood by the faithful (the Left would celebrate in the streets and the Right would boycott the festivities).  In fairness, the first political manipulation of Romero was by the Right, when it wrongly accused him of being a partisan.  Such (false) accusations brought contempt, repudiation, and his eventual death.  After he was vilified by the Right, the Left was all too happy to embrace him and hold him up as their “badge.”
Liberation Theology


Adding to the complexity of the case, during the late 70s/early 80s, Church authorities sought to correct perceived excesses in a Latin American church movement called “Liberation Theology” which fused Christian ideas with modern socioeconomic inquiry to syncretize a radical commitment to the poor.  As Prefect of the Congregation for the Doctrine of the Faith, Cardinal Ratzinger (later Pope Benedict XVI) issued corrections to Liberation Theology in 1984 and 1986, stating that the movement was valid, but warning against Marxist influence, deviation from orthodox Church teaching on the supernatural aspects of the faith, and condoning violence.  Romero was regarded as a conservative cleric most of his life, and he was never an adherent of Liberation Theology.  However, he has been generally associated with the movement after the fact—partly because he is seen to embody its commitment to the poor, and also because some of Romero’s supporters were in the movement.  Card. Ratzinger’s Congregation reviewed Romero’s sermons and writings and concluded in 2005 that “Romero was not a revolutionary bishop, but a man of the Church, the Gospel and the poor.”

Shunned by the Popes?

One of the story lines often spun on Romero is that he got the cold shoulder from the Vatican, including from Pope John Paul II.  If there is a grain of truth behind this narrative, it is that John Paul received many negative assessments about Romero (from government and official sources) and he met with Romero to talk things through.  If the most outlandish versions of the story are to be believed, John Paul was testy and curt.  But that's not the way Romero tells it:  “He did not scold me as some have said but rather it was a dialogue about criteria,” he insisted, “like when Paul went up to Jerusalem to speak with Peter about the content of his preaching.”  At the end of their last meeting, John Paul embraced Romero and told him that he prayed every day for El Salvador.  The claims that the Vatican shunned Romero do not hold up: in the three years that he was archbishop, Romero had four in-person meetings with the Pope (two with Paul VI and two with John Paul).  In Pope Benedict's last year, a bishop had to wait, on average, fifteen years to meet with the Pope!
«Sentire Cum Ecclesia»


Although he was called “the firebrand of Central America” because of his strong denunciation “against the dictatorship” (the latter being Pope Benedict’s words), Óscar Romero was naturally a shy, quiet man.  For most of his clerical career, he was regarded as a staunch conservative, who was seldom seen without his cassock and was known for his prayerful, reverent spirituality and moralistic sermons.  Despite his timid nature, he also had a feisty, combative streak in matters of conscience.  In the early 1970s, he clashed with the Liberal clergy of San Salvador over what he saw as sacramental abuses and he was critical of Liberation Theology.  Even after assuming a more “prophetic” ministry of denunciation and defending the poor, Romero remained unswervingly orthodox, equating abortion to the political killings that he deplored, denouncing birth control, and insisting that sex was proper only between a man and a woman who are married.  Similarly, Romero defended his adherence and submission to the Pope, stating that his communion with Rome was the hallmark of the authenticity of his preaching.  He was pious until the end, a friend of Opus Dei, Eucharistic adoration and penitential mortification.
The Injustices Romero Denounced


Understanding the situation in El Salvador during Romero’s time is the key to appreciating various aspects of Romero’s ministry: Was he too eager to wade into political waters?  Is his example transferable to other places and times, or was it unique to his situation?  Were his actions justified?  Romero laid out his own defense in 1950 in an overlooked article in which he wrote that “the Church is the most authentic revolutionary in history.”  If rulers are just, he wrote, the Church preaches obedience and loyalty.  But, if rulers are unjust, they are not worthy of obedience and the Church must obey God.  “In this case, history does not know rebellion or revolution more valiant than the Church’s resistance,” he warned, “an authentic revolution of twenty centuries filled with uncompromising chapters of blood and persecution.”  Forty years after writing those prophetic lines, Romero found himself in an environment that fit the bill.  At the time that he was killed, Amnesty International attributed 600 politically-motivated assassinations to the government of El Salvador, including 83 in a single five day period —in a country smaller than the U.S. state of New Hampshire.  Amnesty established that El Salvador violated human rights to extents not seen in other countries, exceeding even those of Pinochet’s Chile after the coup d’etat.  The BBC estimates that from 1979-81 around 30,000 Salvadorans were killed by right-wing death squads.
His “Conversion”


The model of Romero’s life that has captured the popular imagination has Romero experiencing a road to Damascus conversion, à la St. Paul, following the assassination of his good friend, Fr. Rutilio Grande in 1977, which opens Romero’s eyes to the reality of injustice in El Salvador.  The model is profoundly appealing and was dramatized in the 1989 film “Romero,” which starred Raul Julia in the title role.  The impact of Grande’s death was certainly a pivotal point which set the tone for Romero’s ministry (it happened two weeks after Romero was installed as Archbishop), but the conversion model is prone to abuse.  First, Romero was always sympathetic to the poor and had been moving toward a more robust defense of their rights for at least a decade.  Second, the conversion model wrongly supposes a static reality of oppression to which Romero turns a blind eye, while disregarding evidence that Romero’s reactions evolved to suit changing circumstances.  Finally, the conversion model is sometimes used to ideologically suggest that all clerics who are not vocal in denunciation are bad shepherds, regardless of circumstance (see previous point).
Romero Lives


Happily, the “Romero lives” slogan is not confined to political posters and rallies of the Left.  The March 24 anniversary of his death is marked on the Church calendar as the Day for Fasting and Prayer for Missionary Martyrs.  The Church of England recognizes March 24 as Óscar Romero’s feast day, and the United Nations observes March 24 as International Day of the Right to Truth.  The anniversary has been commemorated with memorial masses in Rome every year since 1984 (notable celebrants have included Cardinals Eduardo Pironio and Roger Etchegaray, and the Patriarch of Jerusalem); in San Salvador every year since 1986 (could not be done earlier because of the Civil War) and in London since 2007 (homilists have included the Archbishop of Canterbury and Card. Peter Turkson).  An annual conference now called “Romero Days” has been held at Notre Dame University since 1988 (past speakers include Cardinal Óscar Rodríguez).  Popular tributes include artistic works, such as the 1989 movie “Romero,” and a recent tribute by the Christian music group, The Project, found here.
His Message

The Romero Trust (UK, English texts of Romero’s homilies, pastoral letters and more)
Index of the Super Martyrio Blog (updates on the beatification cause, essays & more)
Vatican’s Congregation for the Causes of Saints