«FRUITS OF THE FAITH» 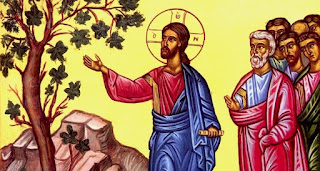 
«ROMERO FOR THE YEAR OF FAITH»


The tributes to the now retired Pope Benedict make clear that his has been a life well lived.  The Parable of the Barren Fig Tree that we read about this Third Sunday of Lent challenges us to question whether our own lives are well lived: whether they have borne fruit, or whether they are like the barren fig tree that Jesus exposes in the Gospel.  The words of St. Luke describing the vinedresser also apply to Archbishop Oscar Romero, who was in the third year of his ministry when he preached this sermon: «Behold, these three years I come seeking fruit on this fig tree, and find none» (Luke 13:6–9).   From 1977–1980, Romero’s preaching of charity and social justice had fallen largely on deaf ears, with politically motivated violence and human rights abuses rising to crisis levels.  Now the archbishop sounded a final appeal to repentance and conversion.
Previously:
Summary of the Homily (2011)
Message to Poor (2012, Span.)
Romero’s message is direct and urgent (English | Spanish | Audio).  “My sisters and brothers,” he pleads, “if this admonition of Jesus were ever valid, then it is certainly now, at this time in El Salvador, when life is endangered everywhere: Repent!”  The tension is palpable in his voice as he continues, “Let us not be surprised by death! Let us not be found on the path of sin and injustice, much less on the path of crime and disorder!”  The path he recommends is clear: “Let us walk with Christ and if death overtakes us as we walk with him, then there is nothing to fear: death is a victory for those who believe in the Lord.”  Romero uses the three readings of the day, God’s call to Moses (Exodus 3:1-8, 13-15), St. Paul's teaching on the Exodus (1 Corinthians 10:1-6, 10-12) and the parable of the barren fig tree (Luke 13:1-9), to derive his unified message, which could be boiled down to that single word: “Repent!”  Repentance, Romero preaches, is “the synthesis of the whole gospel” and “the foundation of the Kingdom of God.”


Archbishop Romero’s call to repentance is universally applicable and does not single out one side of the political spectrum.  Its even-handedness is evident from Romero’s explanation of the first reading, in which God dialogues with Moses and Romero draws lessons for all factions.  First, God tells Moses to remove his sandals when he is in God’s presence.  God mandates, Romero explains, that “all those who are going to lead people along the paths of God must have a personal experience of God.”  This lesson is directed at the social reformers.  “Without a doubt many politicians are listening to me,” Romero says, “many people who have no faith are trying to make our country a place of greater justice and so I say to them: my brothers who are atheists, my dear brothers who do not believe in Christ or in the Church, your struggle is noble but not complete.”  To them, Romero counsels: “Allow yourselves to be led by the plan of God, by the plan of true liberation.”  When God tells Moses his name, this unpacks a message to conservatives who might think the Church is overstepping its bounds by talking about politics.  When God says “I am ‘That I Am’,” Romero explains, “he is saying: I am a dynamic being. I am One who ought to be discovered in the dynamics of history.”  When God tells Moses that He is the God of Abraham and the Patriarchs, He is saying that He is “a God who lives, who feels, who acts and creates and guides history ... who accompanies us as he accompanied Israel.”
Romero weaves the same strand through his interpretation of the second reading, in which St. Paul likens the Christian path to the Israelites in the Exodus, pointing out that those who were displeasing to God were left to die, their bodies littering the desert.  “From this we see that the indispensable requisite is not that one is a Christian or a child of Abraham,” says Romero, “but rather that one enters a process of personal conversion.”  From the Pauline epistle, Romero draws out his dominant theme in this sermon: penance, or repentance.  “If we do not do penance then our baptism is useless,” he warns.  “If we do not do penance then it does not matter that we are members of the People of God. If we do not turn our hearts toward God and repent of our faults we cannot think that we will enter the kingdom of heaven.”  Again, Romero’s scriptural interpretation is an equal opportunity offender to all political affinities: “what does it mean to repent here and now in El Salvador?,” he asks.  “The true People of God,” he responds, “are those who walk united with Christ, seeking the heavenly Jerusalem, working to better this earth but not working according to their own plans but according to the plan of the transcendent God.”  By his reference to a “heavenly Jerusalem,” Romero makes it clear that, like Jesus, he is speaking about a Kingdom that is not of this earth, even if it operates on the terrestrial realm.


Romero brings his synthesis to a high pitch around the Gospel.  Romero takes pains to establish the theological bases of his preaching.  He explains that the Gospel of St. Luke is known as the “Gospel of Mercy,” because of its emphasis on attaining God’s grace. He sets up the big picture, describing the story-arc of the Gospel: “from chapter 9-19 we are presented with a true Christology, a broad presentation of the meaning of Christ as the savior of humanity,” he explains.  “Saint Luke’s gospel places a definite focus on the journey to Jerusalem,” he says, but not the “geographical details … because Saint Luke is not interested in those details but rather is concerned about the theological content of the journey.”  It is “the path of suffering, the path of Calvary, the path of humiliation and the cross,” he explains.  “For the people of Israel and in a special way, for Jesus, Jerusalem signifies the city of God’s promises,” he continues, and when Jesus enters the City, “he brings with him everything that is pure in Jerusalem and leaves behind all the bad habits, the sins, the injustices and the evil plots of the people.”  Yet, despite his purity, the religious authorities spurn him and condemn him.  “As Jesus is hung on the Cross during this journey that terminates in great humiliation, he raises up with him all that is innocent and holy,” explains Romero.  “From the Cross all the promises of a purified Jerusalem are extended to all people who want to believe in the Lord Jesus Christ.”
It is in this journey toward his sacrifice that Jesus preaches the Parable of the Barren Fig, and it is in this clearly theological context of aspiring to be the “purified Jerusalem,” that Romero places his social preaching and his interpretation.  “We should interpret the parable of the barren fig that is presented to us in today’s gospel from the perspective of God’s mercy,” says Romero.  “Saint Luke points out the gentleness and patience of God who waits: perhaps tomorrow, perhaps in a year,” he says, evoking the imagery of the fig tree’s keeper, who opts to patiently wait for the barren plant to bear fruit.  “This is an echo of the Lenten call to examine our lives and to see if we are producing fruit or if we are simply trees occupying space in the world,” Romero explains.


“To repent is a sorrowful journey in the midst of tears and mourning,” following Jesus on his Lenten path to Jerusalem, Romero recognizes, “but this journey ends in a victory: the resurrection of the Lord is the resurrection of us all.”
«Septem Sermones Fidei:» the last seven sermons of Archbishop Romero
Posted by Carlos X.