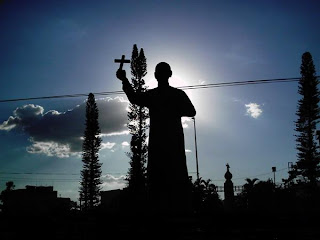 One month to the day before his martyrdom, on February 24, 1980, Archbishop Romero preached on the Temptations of Christ by Satan in the desert. (This is a series on Romero’s seven final sermons: Read the English text of the Homily here, and the original Spanish text here.) “Today’s gospel presents us with the confrontation between two powerful forces,” he said, introducing his subject: “Jesus and the Devil.”

Faced with a gathering darkness, as the end of his own life drew nearer and his country slipped helplessly toward civil war, Romero presented Christ as the victorious Divine Master to follow and emulate. “Jesus prays and fasts, and confronts the temptations of evil,” he told the audience. “Jesus is perfected as a man through the trials and His victory over evil is so resplendent that throughout the three years of his public ministry this victory will shine forth on those principles which enabled Him to overcome the temptations that attempted to destroy the plan of God.” Two days before, Romero himself had marked three year as Archbishop. As he readied for the Passion which would culminate his own ministry, Romero was determined to alert his people about specific temptations he thought might disrupt “the plan of God” in El Salvador, and he used the Gospel showdown to illustrate them.

First, Romero carefully explicated the context of the confrontation. “For those who lived during the time of these events, the desert, an uninhabited area, was a place where wild beasts and demons dwelt,” he said. Then, he provided a theological primer: “As Jesus enters into this solitary place He becomes the new Adam who will not taste the delights of Paradise without first creating the desert into Paradise. Jesus is the second Adam,” he continued, “the redeemer of humanity who will give us, if we follow His path, the desert that has now been changed into Paradise.” And with this promise that a retreat into the wilderness could be a path to salvation, Romero proceeded to break down the elements of the story by relating them to current concerns.

Take fasting. He extended the Lenten call to fast to a call to the oligarchy to abstain from their excesses and demonstrate generosity, “so that they might use their economic power to bring happiness to people rather than cause the ruin and disgrace of people.” He added, “If they do not want to listen to me, let them at least listen to the voice of Pope John Paul II, who this very week, at the beginning of Lent, exhorted Catholics of the world to give up superfluous wealth in order to help the needy and to do this as a sign of Lenten penance.” He also urged the poor, who were already “fasting” because they lack food, to “give a penitential meaning to their situation,” and to work to improve their lives rather than to become complacent.

Romero returned to Jesus in the desert, tempted by Satan to mitigate his fasting hunger-pangs by turning stones into bread. Romero likened the Devil’s proposal to “an easy solution,” a juvenile plan, “like the solution of many politicians who want to be able ‘to fix’ all situations and do that which is impossible.” It was a sharp rebuke to socialists who wanted to solve El Salvador’s problems by forcing a civil war to bring about a Marxist revolution that would redistribute the wealth. “Do not try to reorganize in an instant a society that has been unjustly organized for so many years,” he cautioned. Stone hearts would not be made tender by fiat. He called for a restoration of Christian values: “May people learn how to live the austerity of the desert and learn how to savor the powerful redemption of the Cross.”

Romero also uses Christ’s duel in the desert to reject the temptation of the Right and the temptation of the Church, as well. First, Romero recount’s Satan’s conjuring up a vision of wealth and power, like “a great procession of members of the military and all the carriages of the emperors.” Romero scoffs at the cheap appeal of blood money: “what sad possessions—and I do not want to have something that is a possession of the Devil.” But Romero recognizes that those who are intoxicated with their own power may find it difficult to give up the drug. “Why do men fight in El Salvador? For power.” He reminds us that Jesus preferred to go hungry than to be to bow down at the altar of earthly power.

Then, Romero recounts Satan’s challenge to Christ to leap from the pinnacle of the Temple and summon a legion of angels to break his fall. Jesus refuses to be a Messiah of spectacle and cheap stunts. “It is not necessary to perform grandiose actions,” Romero states. “A triumphalistic religion,” he says, “is not necessary.” He adds, “and it does much harm.” (In this, Romero was in tune with the Church, too: Pope Paul VI had donated his papal tiara to a museum and his successors would give up much of the pomp and regalia of the papacy, altogether.) God’s plan, Romero concludes, is “the simple life, the ordinary life—but giving this simple, ordinary life a meaning of love and freedom. How beautiful our country would be if we all lived the plan of God, each person busy in his or her job, without pretensions of dominating anyone, simply earning and eating in justice the bread that each one’s family needs.”

Two days after the Sermon, Romero went on his last spiritual retreat. Having received death threats, Romero wrestled with his own darkest demons—the fear of being violently killed.  (James R. Brockman, S.J., The Spiritual Journey of Oscar Romero, SPIRITUALITY TODAY, Winter 1990, Vol.42 No. 4, pp. 303-322). Being assured by his confessor that God, who had assisted the martyrs, would comfort him, too, if the moment ever came, Romero vowed “to become more identified with Jesus each day, accepting His gospel more radically.” Id. Then Romero made a final solemn vow:

Thus do I express my consecration to the heart of Jesus ... Thus also I place under His loving providence all my life, and I accept with faith in Him my death, however hard it be. I do not want to express an intention to Him, such as that my death be for my country's peace or our church's flourishing. Christ's heart will know how to direct it to the purpose He wishes. For me to be happy and confident, it is sufficient to know with assurance that in Him is my life and my death, that in spite of my sins I have placed my trust in Him and I shall not be confounded ...

Thus, he began the final month of his life.

NEXT: The Transfiguration of the Lord (Spanish)

Post Script -- During his February 27, 2010 «Angelus» prayer, Pope Benedict XVI emphasized the need to put God before wealth. As Archbishop Romero urged his followers, in his Feb. 24, 1980 sermon, to strive for “the simple life, the ordinary life ... each person busy in his or her job,” Benedict said we should seek to lead “a simpler and more sober lifestyle, the hard work of every day ... practiced in different ways according to various vocations of people.”
Posted by Carlos X.