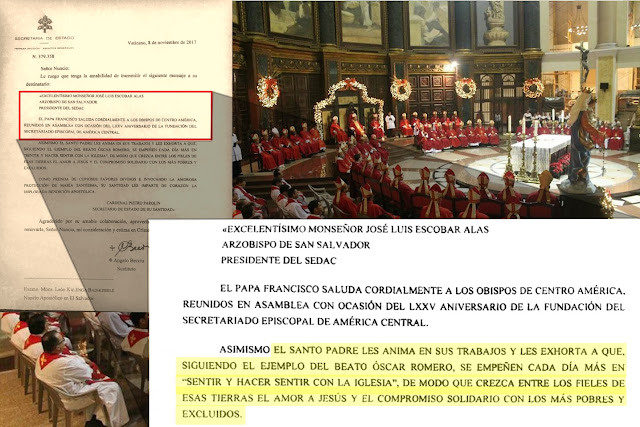 Español | italiano
#BlessedRomero #Beatification
Pope Francis sent a brief message to the 60 Central American bishops gathered for the 75th anniversary of the founding of the Episcopal Secretariat of Central America (SEDAC), urging them to “follow the example of Blessed Oscar Romero, to commit yourselves more and more to ‘Feel and Cause to Feel with the Church,’ so that the love of Jesus and the commitment to solidarity with the poorest and most excluded grows among the faithful of your lands.”
“To Feel With The Church” was the episcopal motto of Archbishop Romero, the martyred archbishop of San Salvador, and the phrase derives from the Spiritual Exercises of Saint Ignatius of Loyola, founder of the Jesuits, the order of priests to which the pope belongs. SEDAC includes the episcopal conferences of Belize, Costa Rica, El Salvador, Guatemala, Honduras, Nicaragua and Panama. Poverty, violence and social injustice prevail in the isthmus and Romero has become an international symbol of the Church committed to the oppressed.
The Pope's message is the latest sign that Francis wants to see bishops in the region who “commit” to the struggle for equality and social justice and who care for the poor. Another sign in the same direction was the elevation of the auxiliary bishop of San Salvador, Gregorio Rosa Chávez, a collaborator of Romero, to the College of Cardinals earlier this year. In fact, it was Rosa Chavez who read the pope's message to the other bishops. In some circles, there has been the impression that the bishops have not identified sufficiently with popular causes. “We want bishops like Monsignor Romero” became a popular veto against an episcopate which the masses perceived as too remote and not “on the side of the poor.”
For their part, the bishops pledged their adherence to the example of Romero. “We have lived days of grace in this blessed land that gave us our brother bishop Msgr. Oscar Arnulfo Romero, a man of God who always strove to ‘appear clean in the presence of the Lord’ and who received the priceless grace of surrendering his life at the altar,” the bishops declared in their final message for the Nov. 27-30 meeting, which also commemorated the centenary of the birth of Romero. “His testimony has moved us, his word has enlightened us and we entrust to his intercession our episcopal ministry and the life of our peoples; to have prayed before his tomb and to have visited the town to which he was born has marked us deeply.”

The isthmus will be decisively in the sights of the pope with the approach of the 2019 World Youth Day, which will take place in Panama and will be marked by a papal visit to the region. Another look at the region could also be occasioned by Romero's expected canonization. In fact, an announcement about the process could come at any time and Francis’ invocation of his name brings to mind the General Audience in January 2015 in which Francis invoked Romero a day before a panel of theologians approved the recognition of his martyrdom, opening the way to his beatification.