«THE GRAIN OF WHEAT»
[Index] 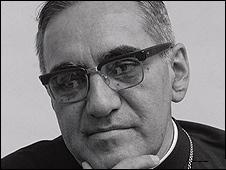 Does it really matter what Archbishop Romero said in his March 24, 1980 homily—isn’t the most important thing about it that he was assassinated at the end?

(This is the second part of a series on the final seven homilies of Archbishop Romero started last year. To read the text of this homily in English, click here. For the original text in Spanish, click here. And, to hear a segment of the audio of Msgr. Romero delivering the homily, click here.)

At first glance, Romero’s final homily would appear to be strictly a private affair—its content, of relatively little interest to the outside world. After all, this Monday night Mass, held in a small chapel in a medical complex, was a personal service commissioned for the anniversary of the death of a Romero family friend, and was heard only by the mourning relatives of Sara Meardi de Pinto, some Carmelite nuns from the hospital, and a handful of faithful who stopped in for a weekday mass, perhaps after finishing work. But Romero himself opens it up at the outset: “My dear sisters and brothers,” he starts—“I think we should not only pray this evening for the eternal rest of our dear Doña Sarita, but above all we should take to ourselves her message, one that every Christian ought to want to live intensely.” Now, he’s addressing not just those gathered that fateful evening at the Divine Providence Chapel, but “every Christian.”

It makes sense, with this more universal framework, that Romero centers his brief sermon around a lengthy passage from the Second Vatican Council, which he recites to his audience. Vatican II is the Church process opened by Pope John XXIII and closed by Pope Paul VI, which sought to make the Church more relevant to the modern age, and contributed to its sharpening its stands on social justice—a call heeded by Romero in his own ministry and relied on as the basis for his pastoral action. Romero cites a passage from Gaudium et Spes, one of the documents produced by the Council, which calls on the faithful to work for justice:


[And] after we have obeyed the Lord, and in His Spirit nurtured on earth the values of human dignity, brotherhood and freedom, and indeed all the good fruits of our nature and enterprise, we will find them again, but freed of stain, burnished and transfigured, when Christ hands over to the Father: “a kingdom eternal and universal, a kingdom of truth and life, of holiness and grace, of justice, love and peace.” [Citations omitted.]

This appeal of the Council, Archbishop Romero tells us, calls out to all us of us, and can—and must—be taken up by private citizens in our individual capacities. If we accept the invitation, the reward will be great, Romero preaches, invoking the Gospel reading for that day (John 12:23-26), which states that, “unless a grain of wheat fall into the ground and die, it abides alone; but if it die, it will bear much fruit.” Just the same, Romero says, “those who out of love for Christ give themselves to the service of others, will live, like the grain of wheat that dies, but only apparently. If it did not die, it would remain alone. The harvest comes about only because it dies, allowing itself to be sacrificed in the earth and destroyed. Only by undoing itself does it produce the harvest.”

We each are like that grain of wheat: “Dear brothers and sisters,” Romero invites, “let us all view these matters at this historic moment with that hope, that spirit of giving and of sacrifice. Let us all do what we can.” Doing what we can does not mean that we all must join a political organization, or go march or strike, Romero suggests. He had started to make the point the day before in his famous “Stop the repression” homily. In that sermon, he had chided activists who try to turn a refuge into a barracks by forcing people who may have just sought sanctuary to do political work. “The refuge is a place where the sick also work,” he had said, alluding to the spiritual contribution of their suffering, if offered as a prayerful sacrifice to support the cause. “That husband and wife and their children who could not work, they wanted to send their children to occupy a church,” he had said, “but how can they go if they are sick? Let them offer up their pain and sickness. This has value,” he insisted. “But when we lose sight of the transcendence of the struggle, everything becomes made up of things that are sometimes even erroneous.”

The important thing is that we all need to contribute to the process of liberation, and no contribution is too small: We need to understand, Romero said, “that nothing can be accomplished without God and that with God, even the most useless work is still work when it is done with a good intention.” Sara Meardi de Pinto, the mother of a progressive newspaper publisher friend of Romero, he declared, had made her contribution, simply by supporting her son in his efforts for the cause, and by her suffering. “We know that no one can go on forever,” Romero said, “but those who have put into their work a sense of very great faith, of love of God, of hope among human beings, find it all results in the splendors of a crown that is the sure reward of those who labor thus, cultivating truth, justice, love, and goodness on earth.” Then he added, “Such labor does not remain here below but, purified by God’s Spirit, is harvested for our reward.”

As he had done in his great social commentaries at the Cathedral, Archbishop Romero imposed a final indispensable condition on works of social justice that we might pursue, for such works to be worthy: “we must try to purify these ideals, Christianize them,” he said, “clothe them with the hope of what lies beyond. That makes them stronger,” he said, “because it gives us the assurance that all that we cultivate on earth, if we nourish it with Christian hope, will never be a failure.” If we imbue our earthly works with a sense of Christian love, even if that effort should ultimately prove unsuccessful here on earth, “We will find it in a purer form in that kingdom where our merit will be found in the labor that we have done here on earth.” Then, Romero melded his memorial homily into a Eucharistic prayer. Presenting the bread and wine of the Communion banquet, he said, “May this body immolated and this blood sacrificed for humans nourish us also, so that we may give our body and our blood to suffering and to pain—like Christ—not for self, but to bring about justice and peace for our people.” At that moment, the assassin’s bullet thundered.

Thus was he killed, as he “celebrated the sacrifice of forgiveness and reconciliation” (Pope John Paul II, Remarks at the San Salvador Cathedral, March 6, 1983). “Consequently, his death was truly ‘credible’, a witness of faith” (Pope Benedict XVI, Remarks to Reporters, May 9, 2007). And thus a homily that was heard by a select few becomes relevant to the entire Christian world.
Posted by Carlos X.