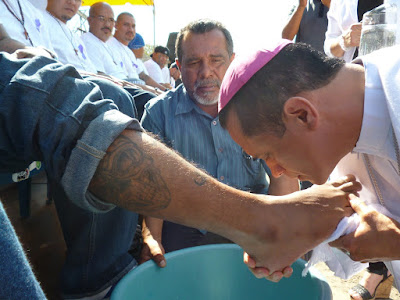 
Pope Francis has appointed Mgr. Fabio Reynaldo Colindres Abarca, 56 years old, as the new bishop of the eastern Salvadoran department of San Miguel, birthplace of Blessed Oscar Romero. Since 2000 he had served as Vicar General for the Armed Forces and in 2008 he became the Military Bishop of El Salvador. But Bishop Colindres has become a household name in the country mostly because of his role as mediator of a gang truce in 2012.


The appointment of Mgr. Colindres as residential bishop of San Miguel follows a series of similar appointments by Francis, which I liken to the moves in a chess game: each one leaves us with something to think about, since it is only part of a sequence, leaving the suspense of the next move. The last time Francis created a bishop in El Salvador was in January 2006, when he elevated Mgr. William Iraheta to Bishop of Santiago de Maria. The appointments since have been internal moves, which leave vacancies in their wake. For example, in February 2006, Francis transferred the then Bishop of San Miguel, Morán Aquino, to the Diocese of Santa Ana—leaving San Miguel vacant. Now he has appointed the Military Bishop as Bishop of San Miguel, but now the Military Ordinariate is vacant.


What is clear is that Francis has promoted a hierarchy with moderate to progressive tendencies. In his most outstanding promotion, he appointed the auxiliary bishop of San Salvador, Gregorio Rosa Chavez, to the College of Cardinals, a move that has proved both successful and popular. Rosa Chavez is a progressive. Mons. Iraheta, the only new bishop that Francis has created in El Salvador, follows a similar line. The prelates that Francis has transferred internally—including this newest appointment—tend to be moderate to slightly progressive, but not of the caliber of a liberal lion like Rosa Chavez. And they are definitely not conservative—the last of those have retired in recent years.


But, can this appointment be categorized as a pastor in the Bergoglian mold? While the connection may be difficult to recognize at first glance, I would say that the Bergoglian logic emerges around the pontiff's desire to see pastors who dare to try ambitious projects. In a famous phrase from his exhortation «EVANGELII GAUDIUM», Francis declares, "I prefer a Church which is bruised, hurting and dirty because it has been out on the streets, rather than a Church which is unhealthy from being confined and from clinging to its own security ... More than by fear of going astray, my hope is that we will be moved by the fear of remaining shut up,” writes Francis," within habits which make us feel safe, while at our door people are starving and Jesus does not tire of saying to us: «Give them something to eat» (Mk 6:37).”


It is in this sense that Mons. Colindres fits into the pope's scheme. The gang pact negotiated by Colindres has been very controversial and unpopular. It worked for a year and then collapsed amid accusations that ran from it was a bad idea to it was illegal or the product of corruption. For better or for worse, Colindres became deeply immersed in this process and seems to know more about the structures of the gangs than those of the military of which he was ordinary. He constantly visited prisons and celebrated Masses and preached the gospel of conversion to gang members. When Francis received the then Salvadoran president Mauricio Funes in the Vatican in 2013, the gang truce figured as an example of the collaboration between the state and the Church for the good of society. When the Pope received a group of Salvadorans in the Vatican in 2015, he told them that El Salvador needed an evangelization “that will help it to foster the promotion and development of a nation that seeks true justice, genuine peace and the reconciliation of hearts.”


Finally, Colindres may fit in the papal mold precisely because he had the courage to try to do something that went wrong. It is true that after the collapse of the truce, the fortunes of the bishop changed. When the truce was going well, the Apostolic Nuncio accompanied Colindres in the prison visits. When it failed, the Church stepped back and declared that Colindres had acted on his own. Several of the other mediators were investigated or imprisoned. Colindres was not invited to other working groups, such as the new government’s round table to discuss security issues.


Pope Francis said a few days ago (and had said before) that some believe that being humble is being polite or closing your eyes in prayer. Instead, said the Pontiff. “There is a sign, a unique signal: accepting humiliation. Humility without humiliation is not humility.”


And we know that Francis likes humility, and he also likes to rehabilitate the name of a person who has fallen when the Pope thinks they did not deserve to fail.