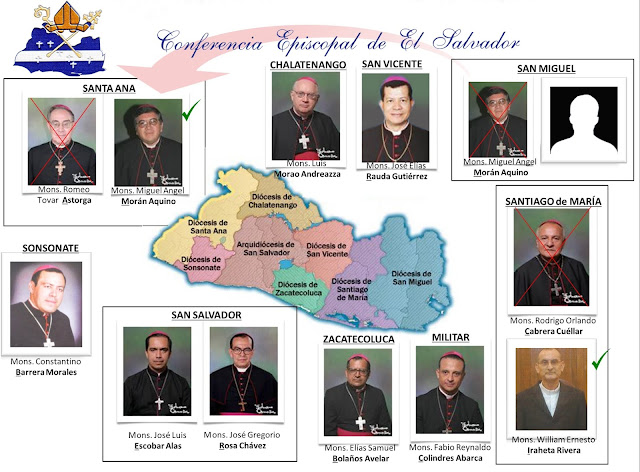 
For the second time this year, Pope Francis has changed the composition of the Salvadoran bishops, replacing the Bishop of Santa Ana, one of the seven territorial dioceses of the ecclesiastical province of El Salvador. The Holy Father has transferred the current Bishop of San Miguel, Mgr. Miguel Angel Moran Aquino to that see, taking the place of Mgr. Romeo Tovar Astorga, who has reached the age limit of 75.


The appointment looks like a chess move because it leaves future movements pending. First, the transfer of Mgr. Moran from San Miguel to Santa Ana, leaves a void in the Diocese of San Miguel, which the Holy Father will have to fill in due time. It is the only vacant seat in the Salvadoran ecclesiastical province. It is also likely that the Holy Father will appoint a relief for Mgr. Luis Morao Andreazza, Bishop of Chalatenango, who has also surpassed the age limit (he is already 76). If the Holy Father fills these positions with future transfers, he could create additional vacancies.


Mgr. Moran Aquino, 60, is a native son of the Diocese of Santa Ana and was pastor of its cathedral; he has been a bishop for 15 years. On a different note, as the ordinary in San Miguel, he got to know the figure of Archbishop Romero, as the first Salvadoran Blessed was born in San Miguel, and Mgr. Moran had to become an advocate for his beatification cause. Among his other positions, he was prefect of studies in the major seminary of San Jose de la Montana, and is currently delegate of the Episcopal Conference to CELAM and to the institution responsible for social prevention among the clergy.


The retirement of Astorga, now bishop emeritus of Santa Ana, represents the departure of the last conservative prelate from the Salvadoran bishops' conference; he joins the bloc of retired conservative prelates, which includes Mgr. Fernando Saenz Lacalle, Archbishop Emeritus of San Salvador, and Mgr. José Oscar Barahona Castillo, retired bishop of San Vicente. By contrast, the composition of active bishops consists mainly of moderate or progressive prelates, including the recently appointed new bishop of Santiago de Maria, William Iraheta Ernesto Rivera, who will be installed on 12 March.


[Partial index of the blog]
Posted by Carlos X.