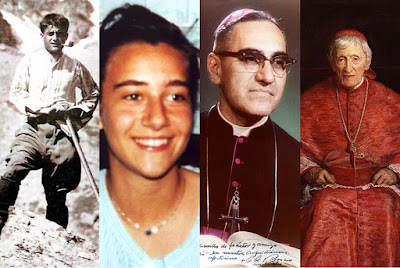 Google Translate:
Español | italiano
#BlessedRomero #Beatification
Blessed Oscar Romero is included in a Catholic News Agency poll asking readers on the CNA website which of four blessed they “would like to see canonized first.”  The four choices are:
Pier Giorgio Frassati (Italian, 1901-1925).  Bl. Frassati was a member of the Third Order of Saint Dominic and social activist, who died of polio aged 24.  He was beatified on May 20, 1990 by Pope John Paul II.
Chiara Badano (Italian, 1971-1990).  Bl. Badano was a teenager from the Focolare Movement who died of bone cancer.  She was beatified at lightning speed 20 years after her death on September 25, 2010 under Pope Benedict XVI.
Oscar Romero (Salvadoran, 1917-1980).  Bl. Romero is the only contender from the Americas and the only martyr in the group.  He was beatified on May 23, 2015 under Pope Francis.
John Henry Newman (English, 1801-1890).  Bl. Newman was an Anglican priest, poet and theologian and later a Catholic cardinal.  He was beatified in England on September 19, 2010 by Pope Benedict during his papal visit there.
All four are eligible for canonization as all four have been beatified and are one miracle away from being elevated to the altars.  Obviously, the poll is non-binding and neither its result nor any showing of popularity regarding each candidate will move that person closer to the sainthood.  This is not to say that the opinion of the faithful is not taken into account in the canonization process.  The “sensus fidelium” comes to bear indirectly in at least two ways.  First, the requirements include that the person nominated for the sainthood have a "reputation for holiness."  Secondly, after a person has been beatified or canonized, the Church likes to see the saint develop a “cult” of devotion.
The four sainthood candidates represented in the CNA poll each has the backing of his or her own constituency, for lack of a better word, within Catholicism.  During the first twenty-four hours that the poll was open, the “competition” was neck and neck.  Initially, Bl. Romero lagged slightly behind in third place numerically, but statistically tied with other candidates, usually with less than ten votes difference.  On day two, Romero rose to the top of the numerical vote count, but still remained statistically tied, with the difference narrowing to a couple of votes at times.  When this note was uploaded, Bl. Romero was tied with Bl. Frassati for first place, with each drawing 402 votes and 27%.  Bl. Newman was sixteen cast votes and one percentage point behind.  Bl. Badano brought up the rear with 312 votes and 21% of the preference.
The poll coincides with a big online push by backers of Bl. Pier Giorgio to spur his canonization in 2018.  According to a CNA story posted the same day as the poll, a group of Catholic young people are asking for testimonies and signatures in support of his canonization ahead of the 2018 synod on youth in Rome.  A web site promoting his cause is entitled “A Letter From Young People Around the World Asking the Holy Father to Canonize Blessed Pier Giorgio Frassati at the Upcoming Synod on Young People, the Faith, and Vocational Discernment in October 2018.”  It has reportedly collected thousands of signatures from over 50 countries, directed at the Pope and calling for Bl. Pier Giorgio’s canonization.  Obviously, Romero also has an active lobby working in his favor (full disclosure: I encouraged people to vote in his favor on my social networks) during his centennial year, and Bl. Newman also had a full court press during his centennial in 2010, and he enjoys the advantage of being the only candidate from an English-speaking country in this poll of English-speaking readers.
This last consideration raises a concern that often shadows canonization causes: whether sainthood candidates have networks of supporters who assist and even contribute financially to their causes, and whether it is appropriate to bring such resources to bear that may give an edge to one cause over another.  (Pope Francis has set caps on contributions.)  In the Romero cause, there was even a secret “negative campaign” mounted by his opponents, who tried to kill the canonization drive even before it got under way.  According to remarks by Romero’s postulator Abp. Vincenzo Paglia, “kilos of letters against him arrived in Rome” and slowed his sainthood process.  The interventions included an attempt by the Salvadoran oligarchy to thwart the establishment of a canonization process before it was instituted, but the effort was overridden by John Paul II personally.
Thankfully, those days are over and certainly nothing nefarious is afoot in the CNA poll, which offers readers a foretaste of what may be about to come, as one or more of these four sainthood candidates seems very likely to rise to the altars in 2018.  The representation of two youthful saints and two stately clerics also seems balanced.  Indeed, a few commenters on CNA’s Facebook page have lamented the inability to vote for “all of the above.”

Update: A litte over twelve hours later, Blessed Pier Giorgio has taken a bit of a lead, as of 1:40 PM California time on Friday.
﻿

Final update: A checkup on the poll one week later finds Blessed Romero in third place—a showing that does not surprise his followers, familiar with the recurring obstacles in translating his broad support through traditional media.  Paulita Pike, a leader of Cultura Romeriana, a small lay movement around Romero in El Salvador, noted that the voting mechanism in the poll, which required users to register a CNA account and forward the poll to Twitter or Facebook, dissuaded participation of people who do not speak English and were unable or unwilling to jump through such hoops to vote.  Fr. Héctor Martínez, a priest from a rural village in Mexico who joined a pilgrimage to Romero’s birth site in El Salvador, noted that some of the barefoot peasants who made the three-day journey on foot would not have internet access to participate in the poll.  Accordingly, to the minds of Romero’s backers, support for Romero is like a sleeping giant who does not show up in such polls, but did when half a million turned out at his beatification.
﻿

[Partial index of the blog]