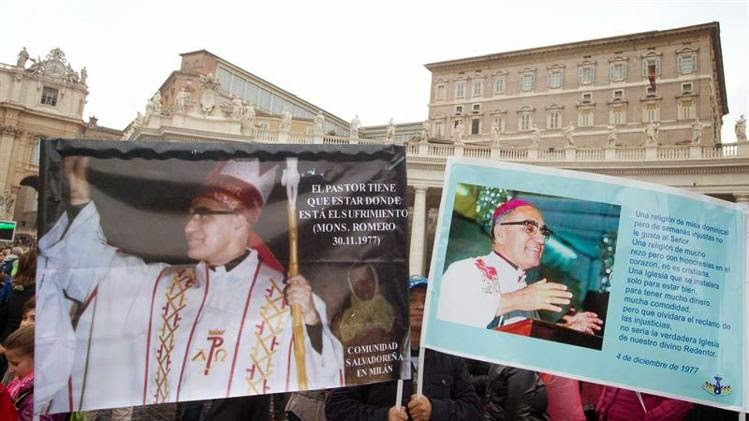 
2014 was a watershed year for Archbishop Óscar A. Romero and his sainthood cause.  After several years parked on a shoulder of the canonization highway, Romero’s cause is finally on the “fast track” and, this year, officials sought to make up for lost time.  The happy results may not be known until next year but, make no mistake, the heavy lifting was done in 2014.
1.“Positio Super Martyrio” Submitted to Congregation for the Causes of Saints


The biggest story this year happened out of public view, but its significance for Romero’s beatification cause cannot be understated.  It was certainly the most significant thing ever reported on this blog.  Late in the year, Archbishop Vincenzo Paglia, the postulator of Archbishop Romero’s sainthood cause, formally submitted the “Positio Super Martyrio”—the “Position Paper on the Martyrdom,” a book-length study of Romero's life based on the documentation from the diocesan phase and other sources, which contains all the information on which the ultimate decision will be made.  This is truly the point where we can actually say “case closed;” nothing further to be added or detracted.  Decision looms.   [MORE]
2. Pope Francis Comments on the Cause


Pope Francis is believed to be a tremendous supporter of the canonization, quietly prodding the process along behind the scenes.  Although he is considered to be a loquacious Pontiff, the Holy Father has been assiduously mum on Romero—until August when, flying back from Korea, he was asked directly about the cause.  “For me, Romero is a man of God,” said the Pope, putting the kibosh on the old accusations that Romero was an activist.  After the Pope hinted that the postulators should move swiftly, the final papers advancing the cause were submitted within a couple of months (see item #1 above). [MORE]
3. Salvadoran Church takes the lead


When the acknowledgments are passed out for the successful conclusion of Archbishop Romero’s beatification process, a large portion of the credit should go to the Salvadoran Church.  In August, the Church inaugurated a “Romero Triennium,” counting down the 3 years until the 100th anniversary of Romero’s birth and going public with the goal of having Romero canonized by then.  The church even sent a high ranking delegation of bishops to ask Pope Francis for his blessing.  To think that there was a time when only one man in the bishops’ conference was friendly to Romero!  [MORE]
4. Salvadoran government does its part


For years, the obstacle for Abp. Romero’s beatification was the perception in the Church that Romero had been hijacked by the Left.  Keenly aware of that concern, the leftist ruling party in El Salvador has walked a fine line under Pres. Salvador Sánchez Cerén, a former guerrilla, providing solid support for the beatification process but avoiding provocative statements or gloating.  For its part, the opposition has also been largely cooperative, offering muted support for the cause (but see item #9 below).  [MORE]
5. San Salvador Airport named after Abp. Romero


A reflection of the kind of year Romero had in 2014 is that we rank the naming of his country’s international airport after him as our #5 story.  A couple of years ago, not only would this have been the top story, but several of the other stories in our top ten would be the supporting narrative.  In addition to the airport, the great hall of the presidential palace was named after Romero.  Add the street abutting the Cathedral and a new modern traffic artery also named after Romero and it is clear that this martyr has left a giant-sized mark on his diminutive country.  [MORE]
6. False starts


Expectation regarding the anticipated beatification of Archbishop Romero was so high in 2014 that, not once but twice, a false announcement was prematurely circulated in the international press.  The first time, “fevered speculation” was triggered when the Auxiliary Bishop of San Salvador commented that the Archbishop had major news to report.  That announcement turned out to be simply a recap of a meeting with the Pope about Romero (see item #3)—big news to be sure, but not the major announcement many had expected.  More recently, a famous Liberation Theologian was responsible for another misfire.  Let’s hope the third time’s the charm!  [MORE]
7. Fr. Rutilio Grande’s Canonization Cause


No doubt the commencement of the beatification process for Fr. Rutilio Grande, whose 1977 assassination first put Abp. Romero on a collision course with the Salvadoran government, would be immensely satisfying to Romero.  But Fr. Grande’s cause is also important to Romero’s eventual canonization, as Fr. Grande was a Jesuit along the lines of Pope Francis—more about popular piety and embedding himself in the periphery than about ideological manifestos from academia.  Not surprisingly, Francis appears to be thoroughly familiar with Fr. Grande’s case.  [MORE]
8. Liberation rapprochement


Although not limited strictly to 2014, a story that’s been brewing for the last two years is the sense that reconciliation is coming to the sometimes tense and testy relationship between the Vatican and the Liberation Theology current in Latin America.  In February, the “Father of Liberation Theology,” Fr. Gustavo Gutiérrez received a warm welcome in the Vatican, and Leonardo Boff, another leading figure in the movement, was reportedly contacted by Pope Francis.  Although not directly involving Romero, these stories signal a friendlier climate with respect to the Church’s role in Latin America.  [MORE]
9. San Salvador names street for d’Aubuisson


The one hiccup on El Salvador’s official support for the beatification cause came late in the year, when the Mayor of San Salvador, still reeling from a failed bid to capture the country’s presidency, announced that he was renaming a major street in San Salvador after Roberto d’Aubuisson, the man who ordered Abp. Romero’s assassination.  This is a story in progress and it is hard to say where it will go.  Possibilities include: (1) support for Romero defeats the move; (2) rightwing plan moves forward, becomes thorn in the side of beatification and possible papal visit; (3) the affair triggers dialogue and progress toward reconciliation.  One can only hope!  [MORE]
10. A Romero statue in Rome


The Romero Foundation is funding the erection of an Abp. Romero statue in “Giardino El Salvador” (El Salvador Gardens) in the EUR district of Rome.  The monument could help gain Romero a prominent place among modern saints if his statue near the center of the Church’s “headquarters” attracts a following among Romans and visitors to the Eternal City.  Romero already has statues in several cities, including London (at Westminster Abbey, no less), Los Angeles and, of course, San Salvador.  [MORE]


Meanwhile, this blog completed its eighth year posting about the beatification cause of the fourth Archbishop of San Salvador.  The fourth annual reflections on «Septem Sermones ad Pauperem» (“Seven Sermons to the Poor”) was also a meditation on Pope Francis’ Lenten Message.  Featured posts included a look back at Romero’s years in Rome, a rumination on Romero’s liturgical style, coverage of the annual commemorations of his martyrdom, an appreciation of the movie “Romero” on the 25th anniversary of its release, and continual attention to developments in Abp. Romero’s beatification cause.


Merry Christmas, and may we all have a “blessed” new year.